Of Honey wine and melomels.


Honey, a blend of simple sugars, amino acids, fibers and trace minerals, combined with water and yeast transforms into wonderful honey wine. This honey wine, often called mead, was seen as a Nectar fit for the gods “And I have heard some of that nation [Welsh] defend, that it is the very Nectar which Iupiter and Iuno drank.” (Thomas Cogan, 1584). Aged mead is highly regarded and awarded many advantages, as eloquently put down by Charles Butler (1609): “a wine most agreeable to the stomake: it recoverth 1 the appetite being lost, it 2 oppeneth the passage of the spirit or breath, is 3 softeneth the bellie, it 4 is good for them that have the cough. 5 If a man take meth, now and then: he shal receive much benefit by it, against quartan agues, against cacexies, and against the diseases of the braine, as analepsie, & epilepsie, or the falling evill: for which wine is pernicious: it 6 cureth the yellow jaundise: it 7 is also good against henbane with milke, and against the winter-cherie, it 8 nourisheth the body, 9. So that many have attained to long old age, only by the nourishment of meth. 10 For being asked of Augustus the Emperor, by what meanes especially hee Pollio Romulus had so long preserved that vigour both of mind and body, his answere was, Intus mulso, foris oleo [honey within, oil without].” 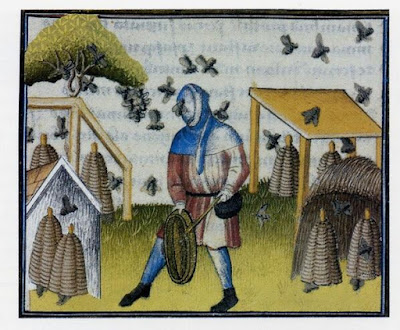 A medieval beekeeper banging a gong to calm a swarm
hanging of a branch near his liriope facemasked head.

References to mead in combination with medicinal herbs are found throughout history, from the early period Anglo-Saxon Leechdoms or medical texts to the 16th century Books of Secrets. Mead infused with herbs and spices, whether for medicinal use or to be enjoyed (or a bit of both) is so common it is referred to by its own term: metheglin. As explained by Charles Butler (1609) the name is obvious, as “Metheglen is meth compoūded with herbs: so called quasi Meth e glen, meth of the vallie, because it is made in the vallies, where is abundance and variety of holsome herbes.” The earliest recipe for metheglin known today is found in the 13th century Tractatus letters “And gif þu wilt make mede eglyn.”

There was no shortage of fermenting with fruit sugars in the past either: while honey wine is thought to have been the first fermented beverage, made by primitive people thousands of years before wine and beer, (Rasmussen) grape wine runs a close second and is well known from ancient history. Grapes have the highest sugar content of any fruit and are therefore the most suitable for making wine. (Hagen, 213) Fruit wines were known to be made by settlers of the foothills of the Alps as early as 2000 BCE from wild grapes, raspberries, blackberries, elderberries, bittersweet nightshade and cornelian cherries. (Hagen, 224) Cider and perry, fermented apple and pear juice, are also well known and mentioned in numerous historic texts, including the Bible - and Peacock (1449) “without sider and wyn and meeth men and wommen myght lyve full long.” The Anglo-Saxon word beor, previously translating to beer (by way of bere for barley), is recently reconsidered to mean cider instead, which is made from apples. (Hagen, 200)

Unfortunately, the combination of fruit juice and honey is uncommon in our time of study…

But is it unknown? Fermenting with honey and fruit is not common in our period of study, and until recently, the only recipes generally available were from the out of period but copious 1669 brewing manual “the Closet of the Eminently Learned Sir Kenelme Digby Knight Opened”. Unfortunately, many mead recipes mentioned in Digby use ingredients and techniques not yet found, or commonly used, in our period of study. For instance, the addition of citrus, like lemons, and the use of raisins, which is common in Digby, is not found in any of the pre 1600 recipes. And the technique of aging in the bottle, often for a sparkling beverage, is something that does not match with the medieval method of serving mead young or aging in wooden casks and barrels either. (Krupp) Fortunately, a couple of period recipes using different kinds of fruit juice in combination with honey and fermentation recently surfaced, for which, as a fruit growing homesteader and avid melomel brewer, I am very grateful!

The 1st century manuscript Historia Naturalis mentions a grape must and honey ferment “Another wine of the sweet class is called honey-wine; it differs from mead because it is made from must” (Pliny), which is fermented together instead of using the honey to sweeten wine, which otherwise would make hippocras. The 10th century manuscript Geoponika also lists Oenomeli from must, fermenting (grape) must with honey. In A Profitable Instruction by Thomas Hyll (1579) oenomel is explained “as the drinke made with wine vnlayde, or without water, and hony, they aptly name Oenomel”, or undiluted fresh wine mixed with honey. The same looks to be the case for Geoponika’s Concerning Oenomeli, and offers two versions of which one is “set it in the sun at the rising of the dog-star during forty days. Some call this nectar” indicating fermentation. It is not obvious oenomel is a fermented drink, but context would indicate it is, from using must or unfermented grape juice, fresh wine which can easily referment, and letting it sit in a warm place for a prolonged amount of time (40 days can mean literal 40 days, or can mean biblical 40 days, as in many, many days).

My personal favorite is also from the Geoponika: the Preparation of hydromel, which lists two versions of fermenting with apples and honey, one with crushed apples and one with pressed apple juice. The 1597 manuscript Van de Byen by Theodorus Clutius has two similar recipes, one To make wine-like honey-water with juice of quince and another To make red wine-like honey-water which back ferments mead with added fruit juice “mix this together and set it to rise as above”, similar to our modern practice of adding fruit juice in secondary fermentation. The recipe is for a medicinal mead, using the juice of amarellen (sour, dark red cherries with long stems) and gives alternatives like the juice of currants, red and black cherries, grapes, apples and pears. While the practice of fermenting honey with fruit juice is not common enough to have coined our modern term melomel quite yet, let alone the sub-terms of cyser for apple mead and pyment for grape mead, thankfully for us modern melomel enthusiasts a handful of interesting early examples does exist.

The recipes which involve fruit and honey:

Historia Naturalis, Pliny the Elder, 77 CE.
XI … Another wine of the sweet class is called honey-wine;

For the complete recipes, and much more on medieval meads, check out my Research Paper Of Hony, a Collection of Mediaeval Brewing Recipes (which lists 39 period honey brews) on:
https://www.academia.edu/31052051/Of_Hony_-_A_collection_of_Mediaeval_brewing_recipes 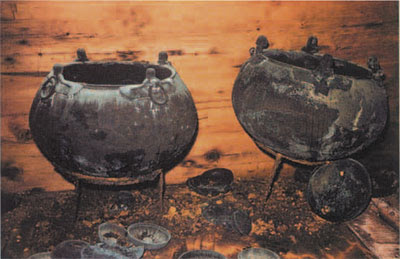 As a side note, archaeological evidence of the analysis of several bronze drinking vessels from the tomb of King Midas (ca. 700 BCE) in central Turkey indicates an interesting combination of fruit, grain and honey. Biomarkers for wine (tartaric acid), beer (beerstone) and mead/honey (beeswax) were found, postulating the theory that the vessels contained a mixture of grape wine, beer and mead, making a sort of braggot or malt mead with grape wine. Unfortunately, as there is no direct evidence for honey fermentation, the honey could easily have been for sweetening only. It is feasible that since these were grave finds, the contents of the vessels might not have been intended for human drinking at all, and could have been a mix of separate brews, the best they had, specially made to please the gods. Except the earliest known recipe for beer made in honor of Ninkasi (found on a Sumerian clay tablet dated to 1800 BCE) also mentions to add honey in combination with wine to a beer malt, indicating the beer/wine/honey was fermented together and meant as a combined drink. Interestingly, while both sources indicate the addition of fermented grape wine, and the archaeologists assumed the honey was added in the form of mead, the grave find information itself is ambivalent, and the Ninkasi recipe speaks of straight honey, indicating the use of honey to back sweeten, instead of adding fermented honey or mead… but then again, as long as honey is added prior to fermentation, mead is bound to happen!

Rasmussen, S.C. The Quest for Aqua Vitae. SpringerBriefs in History of Chemistry, 2014.

Email ThisBlogThis!Share to TwitterShare to FacebookShare to Pinterest
Labels: On Brewing, On Mediaeval Brewing, Published Articles 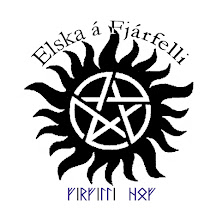 Here is The Booke of Secretes of THL Elska which will discuss in detail the making of soaps • materia medica & profumatoria • fine mead • pottery • &c...

Elska hails from the Dominion of Myrkfaelinn in the Kingdom of Aethelmearc (Ithaca, NY). Her household of husband and son includes numerous goats, two ponies, a spread of fruit bearing trees & shrubs and diverse medicinal herb & tea gardens.

Please enjoy your travels throughout my known world experiences & experiments! 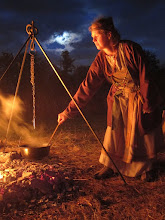